Menu
Skip to the end of the images gallery

Skip to the beginning of the images gallery

Expand the function of Micro:bit with IoT:bit that enables the creation of your own IoT by makecode. It has also extended most IO ports by GVS. Order now.

IoT Bit: A Reliable Tool to Establish Connection Across Devices

Micro bits have gained popularity right after they came into public, and rightly so. The IoT bit we have discussed here can help anyone fully grasp the digital apparatus of computers.

Establishing interconnected networks amongst devices can be crucial in data analysis. IoT-based components are often used to speed up this task for a micro bit. IoT bit is a device that works as an internet extension for a micro bit. It is applied on circuit boards to improve the means of productivity by creating valid communication with the micro bit. IoT bit is a very compact tool that is made with complicated circuitry within itself. Anyone who wishes a reliable internet WIFI extension board for their micro bit should try out this component. Various sorts of tasks done by them can be improved manyfold through this seemingly minuscule module.

Designed with a Variety of Features

The IoT-based module is equipped with many handy features that can ensure the efficiency of the micro bit. The IoT bit uses an ESP8266 as a board for WIFI expansion for data transactions through the micro bit. Led by GVS, the board also has extended IO ports for the micro bit, which lets you add a variety of other parts.

The onboard buzzer can be triggered from the outside, and the RTC clock within can stay functional even without a power supply. The IoT bit also has an earphone jack and an integrated buzzer. The design is very simplistic compared to the functions, as you can construct them any way you please. The four LEGO-like holes make them very adaptable when used in a micro bit.

the IoT bit is a valuable component that itself is made out of smaller components. The hardware of any electrical entity can be deemed very important. Through the micro bit, the direct current is supplied via a USB at five volts. The expectation for maximum current is around 800mA, which appropriate to keep the micro bit functional. The hardware stays operational from -25 to 80 degrees Celsius. The WIFI module used for the micro bit is labeled ESP8266.

The ESP12F is very reliable as it is widely used in components similar to IoT bit. The passive buzzer is worth mentioning too. The RTC timing mechanics lets the device memorize the pace of time even after cutting off the power supply of the micro bit. RTC battery for the micro bit is something you can add in yourself. The battery requires a CR1220 cell. The coding port is a serial port in the micro bit that can delineate the IO slot.

Easy to Install and Acceptable Size

Adding components to a micro bit can be difficult as it is a miniature computer. The IoT bit is a very sizable addition to the micro bit. It has a surface area of fewer than 50 centimeters and is 23 millimeters in depth. The printed circuit board is an essential part of the entire system. The PCB thickness is about 1.5mm. IoT bit has four adaptable slots, which let them get attached to the micro bit. Each of these holes is 2.4mm in diameter.

There is much to discuss a variety of functions visible on the interphase of IoT bit. The micro bit you use will probably have lots of potential in it, which you could not utilize because of not having the right component. IoT bit has a GVS leaded function had grants access to the electronic building module and also a functional 12C communication device. No need to reset the time every time you start the micro bit because of the RTC timing system.

IOT:bit is an expansion board based on IoT for micro:bit. It uses ESP8266 as WIFI expansion board and serial port to communicate with micro:bit. It also has extended all available IO port of the micro:bit which is leaded by GVS and you can extent various 3V E-blocks as LED, photosensitive and servo by using it. At the same time, the IOT:bit with an on-board buzzer for outside sound and an on-board RTC clock for timing without power supply. Let's creating your own IoT by makecode! 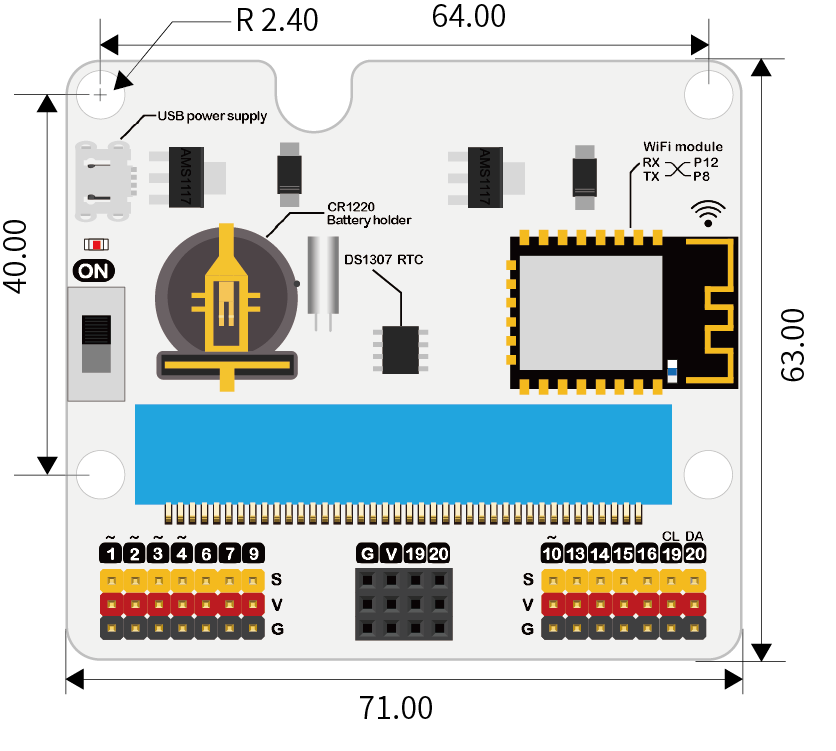 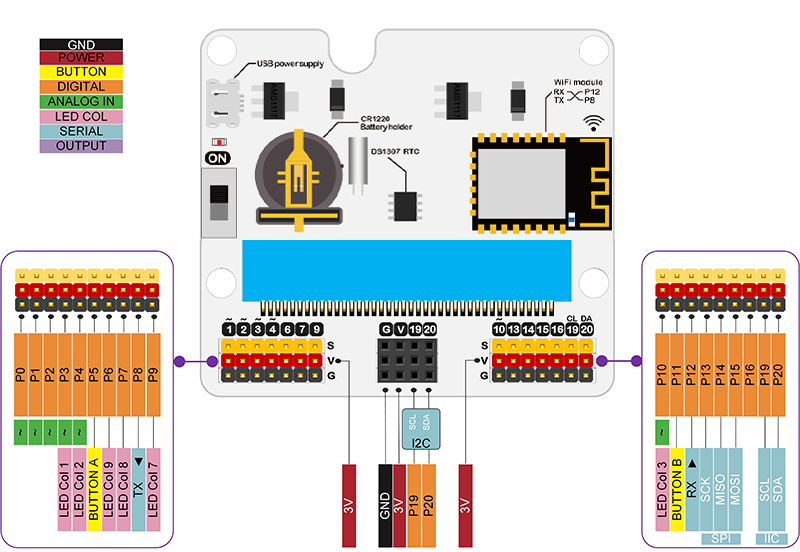 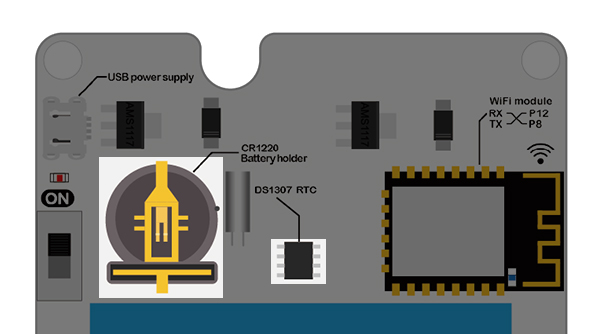 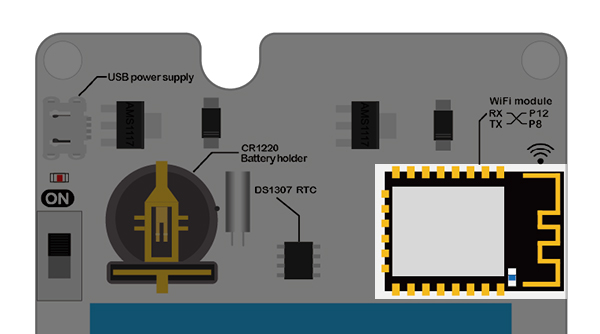 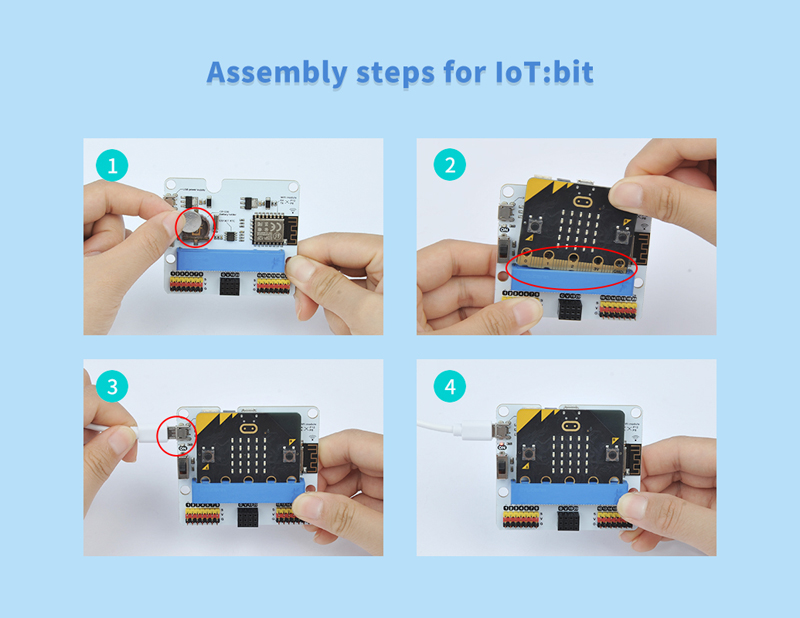 Click on JavaScript of the makecode for JavaScript coding.
https://makecode.microbit.org 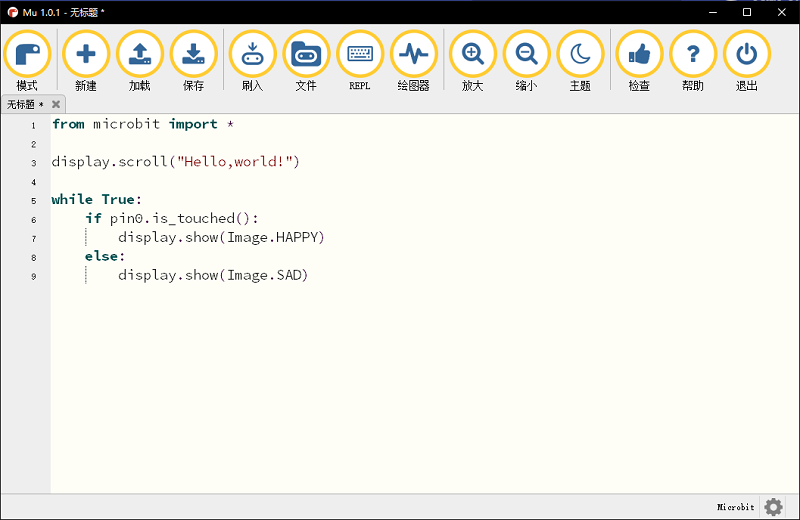