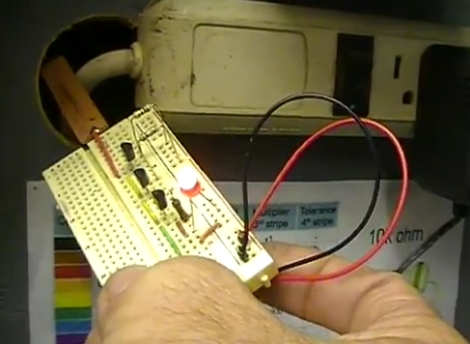 [Dino] is back with another installment of his Hack a Week series, and in this episode he is taking on what he promises will be the last transistor-based project ???at least for a little while. In the video embedded below, he shows off a homemade voltage detector circuit that he constructed using a trio of BC547 NPN transistors. The circuit is pretty simple though very useful all the same. At one end, the device has a small copper strip, which is connected to the base of the first transistor. The emitter of that transistor is daisy chained to the base of the second transistor and so on, until reaching the indicator LED. As noted by one of [Dino’s] viewers, the circuit functions as follows: “The front end copper strip forms one side of a capacitor, and then when you bring it near a voltage potential a super tiny current flows between air dielectric of the “cap??? This is mega amplified with the high gain BC547′s and viola, the LED lights up.??? Since the small bit of current is amplified many times over, the LED lights up even when very small voltages are present. While we might not necessarily trust our lives to [Dino’s] voltage detector, we’re sure it would come in handy now and again.