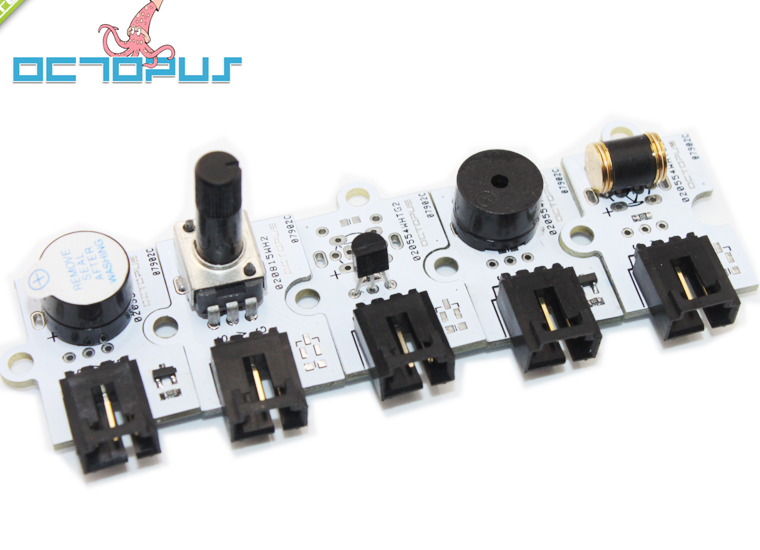 Octopus Electronic Bricks, you can use them to build electronic projects just as easy as piling bricks. By using Octopus electronic bricks, you may connect Arduino/Freaduino compatible boards easily with various digital, analog and I2C/Uart interfaces. These  breadboard-less firm connections are prepared to extensive modules like poteniometers, sensors, relays, servos…even buttons, just plug and play.

Octopus Analog Rotation Brick is arduino compatible and can be rotated upto 300-degree. It is based on the potentiometer. With the Arduino IO expansion board, in combination, it can be very easy to achieve position-dependent interaction with the rotating effect or produce MIDI instrument.

This brick uses the DS18B20 1-Wire digital temperature sensor from Maxim IC. It can report degrees C with 9 to 12-bit precision, -55C to 125C (+/-0.5C). Each sensor has a unique 64-Bit Serial number etched into it that can allow for a huge number of sensors to be used on one data bus.

Octopus Passive buzzer Brick is based on an active buzzer, can not by PWM to control the volume. The volume is constant. And passive distinction is the buzzer posted sign.

Octopus Passive buzzer Brick is based on a passive buzzer, it could be PWM to control the volume. The distinction and active buzzer stickers.