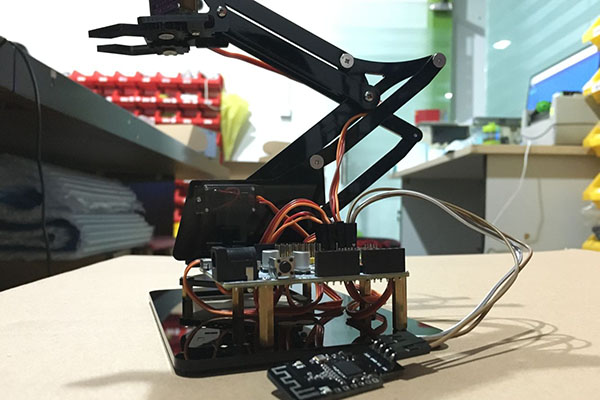 When you finish the construction, how to make it work?

Now I am very carried away with how to control this mechanical arm. We can use potentiometer, rocker or Bluetooth to control it. Potentiometer is awkward to use in here. Rocker is universal and not cool enough. So I chose Bluetooth module last. The last step, connecting Bluetooth module with board. Because there are four servos connected with board, we give the board extra power. If don’t do that, the USB circuit is not enough to support it. If we want to control it by UNO board, we must put the libraries of Servo into the folder of libraries. The libraries will be uploaded at last of passage. We can use class of Servo to create four variable. Such as:   Servo Servo_Catch; Servo Servo_Height; Servo Servo_Distance; Servo Servo_Direction;   And we must give them pins’ number to control corresponding servos. We use “attach” function to do it. Such as:   Servo_Catch.attach(0);

(3);   These are initialize of servos. The most useful function of servos is “write()”. This is to control degrees of servos. If you fill a number in the parameter, the servo will turn to the corresponding degree. For example, if I want servo of catching to turn 30 degrees, I can use it like:   Servo.write(10);

Is it very easy to use? Next, let’s try to write program about how to control the mechanical arm by Bluetooth.

In here, I use libraries of ElecfreaksCar directly to receive data from Bluetooth module. It will be easy if I use the libraries. We can use class of ElecfreaksCar to create a new variable which is named BluetoothModule, such as:   ElecfreaksCar BluetoothModule;   And we use function of “recievedData()” to receive data which is from Bluetooth. We use function of “getRoll()” and “getPitch()” to get data of rocker of APP to control the mechanical arm. Now it is an example about use APP to turn on and turn off LED which is on the UNO board.

Mechanical Arm This is program about the mechanical arm witch is written by me. And you can change it to create yourself program of mechanical arm.